by Undergraduate Admissions at Illinois / Jun 25, 2020 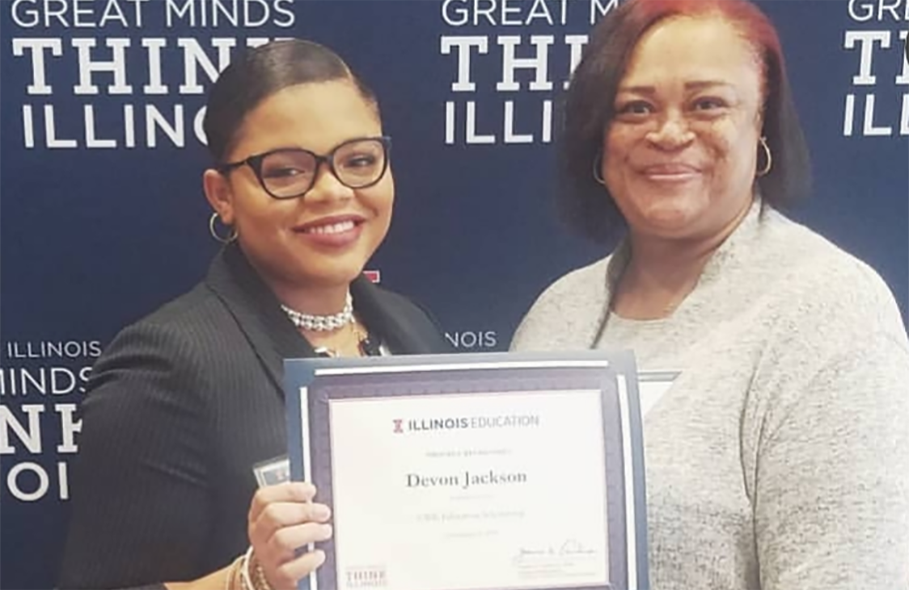 A resident advisor and future educator, Devon is following in her father’s footsteps to become an advocate for the next generation. We sat down with Devon to learn more about her path to becoming a teacher, the importance of diversity, and how her experiences at the University of Illinois at Urbana-Champaign have helped shape her future.

Q: Tell us about yourself.

Devon: “I’m from Bellwood, which is near Chicago and O’Hare Airport. I’m currently studying middle grades education with a literacy concentration and hope to get an ESL (English as Second Language) endorsement when I graduate. I’m also currently an RA (resident advisor) at Ikenberry Commons Nugent Hall.”

Q: Why did you choose to attend Illinois?

D: “I got this teaching scholarship and internship bundle called Golden Apple Foundation, which has the Golden Apple Scholars Program. After I got accepted into that, I looked at where I wanted to go. I grew up in an area where it was predominantly Black and Latinx communities, so I wanted to make sure I’d go to a school that’s very diverse. And so, one of the best schools I considered was here.”

D: “I used to want to be a teacher when I was like 6, but you know, 6-year-olds change their mind every single day. … When my dad had recently passed, then I realized maybe I want to be what he was to my family and community. He was a mentor, somebody everybody can always go to. And I’m like, ‘What can I do with that inspiration? And where in the field can I be?’ …

“I can count on one hand—and not even use all my fingers—and account for all of the Black teachers I had that looked like me. I only had three, so I was like, ‘Yeah, we need more of those. Maybe I could do something with that.’ So that’s why I chose Education.”

Q: How do you hope to change that for people in the future?

D: “Um, I think that’s my problem right now. Golden Apple is a great foundation that has not only provided financial aid but helps with jobs and summer internship opportunities where we can learn about what it takes to be a teacher and classroom experiences. I am happy to be a part of it and thankful for the opportunity. With this opportunity, I have noticed something that is also prevalent in education as well.

“For instance, at the first Golden Apple Scholars Institute, there were almost 200 scholars in my cohort; however, there were less than 20 black scholars including myself—possibly about 17 in total, if I remember correctly. If you want to go into low-academic, low-economic schools, the majority of the population will be Black people and Latinx people. The 17 of us, we grew up in those schools, so we know what it’s like. We can have that advocacy, and we want it, and it takes one to know one to go back into that community and give back. …

“You need to go into the community because those communities are going to be the future generation. I think it is the first major step.”

Read the rest of Devon's story from the UI Office of Undergraduate Admissions...