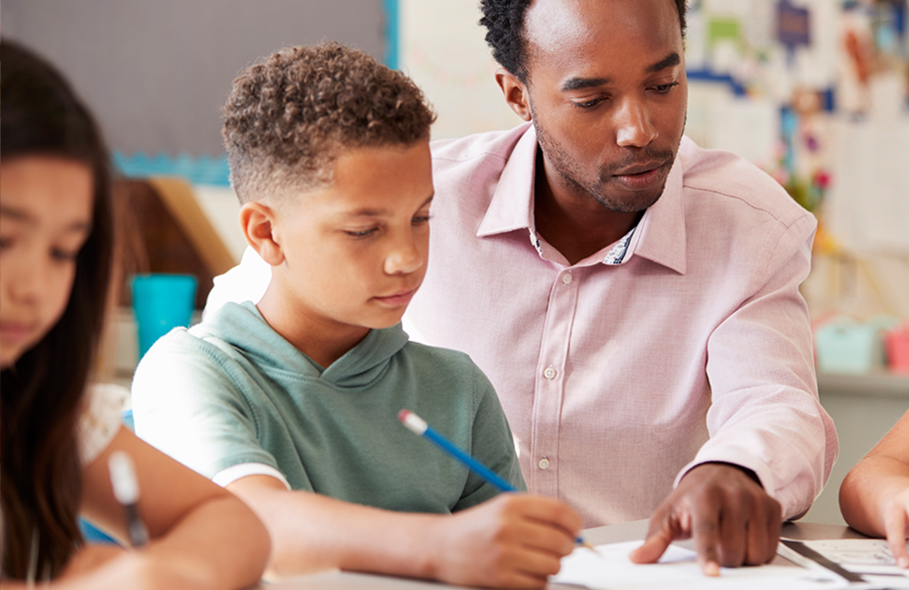 Education at Illinois staff and faculty worked closely with Illinois lawmakers to contribute to two pieces of House Bill 2170—computer science education and a new Freedom Schools Network—which were signed into state law this spring as part of the omnibus Education and Workforce Equity Act.

This March, years of research, reports, surveys, meetings, pitches, and presentations finally crescendoed to completion, says Raya Hegeman-Davis, research and program coordinator in the College of Education’s Bureau of Educational Research. All with one swift swipe of a pen.

“When I heard that this bill had passed both chambers of the Illinois legislature, and so quickly, I almost couldn’t believe it. Up until the moment it was actually signed by Governor (JB) Pritzker, I was tentative about how I spoke about it—because of how big and exciting a step forward this is for students and educators,” she says.

To truly appreciate how momentous this education bill’s signing was, it’s helpful to understand the effort and commitment that advocates like Hegeman-Davis have invested in prioritizing access to 21st century educational opportunities for all those who call Illinois home. 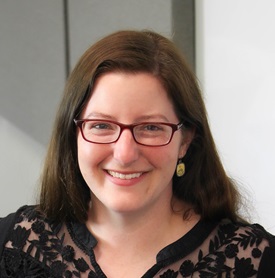 Hegeman-Davis’ role in the College of Education is multi-faceted—in the same day, she could have Zoom calls with a rural school district teacher, members of the Illinois Legislative Black Caucus, or a community relations rep from Microsoft. Her overall focus: collaborating to ensure equitable opportunities for K-12 students and teachers throughout Illinois to receive computer science education.

With the number of constituencies involved with advancing statewide CS education, Hegeman-Davis is quick to emphasize that this piece of Illinois’ 2021 Education and Workforce Equity Act is the result of a massive team effort.

“I initially began working with the university system’s Office of Governmental Relations because we invited Governor Pritzker to speak at our very first Illinois K-12 CS Summit event in 2019,” says Hegeman-Davis. “There had been a bill introduced by Rep. Emanuel ‘Chris’ Welch around that time—HB0817, which dealt solely with expanding CS education in Illinois and unfortunately ended up dying—and we had written witness slips in support of it. We knew there was awareness of the issue building within the legislature. And then Deputy Governor Jesse Ruiz delivered the opening address at the 2019 Summit, which was a huge show of support.”

Both legislators had strong interest in helping support computer science education legislation and discussing strategy on an education bill, says Hegeman-Davis. At one point there was talk about submitting one bill in both chambers, simultaneously, but the group ran into scheduling barriers. She met with Ammons’ office multiple times, as the representative was especially interested in the previous governor’s administrations’ 2017 Task Force report and wanted to fully understand the current situation.

Then in 2020, Rep. Ammons began working within the Illinois Legislative Black Caucus on an omnibus education bill—and pushed for computer science education language to be included. Ammons invited Hegeman-Davis to give a presentation at an ILBC education committee meeting in fall 2020 where she was able to share findings from two statewide K-12 CS Education Summits and additional data.

Being a researcher by training, not a policy maker, Hegeman-Davis teamed up with the non-profit education advocacy organization Stand For Children to craft language appropriate for the ILBC. She says that much of the wording was similar to the recommendations of the 2017 Task Force report, as well as (now Speaker of the House) Rep. Welch’s former bill. Hegeman-Davis credits staff at Stand For Children for writing what she meticulously reviewed, and which ended up being much more robust than previous iterations.

“The language in the Education and Workforce Equity Act requires all districts that serve grades nine to 12 to provide the opportunity to take a computer science course—that’s a pretty big step for Illinois,” she says. “This is the closest legislative wording to a mandate for computational education that has ever been enacted.”

Hegeman-Davis is clear: the new law does not make passing a computer science course a high school graduation requirement, statewide; it also does not order that every Illinois high school or district employ a teacher with a computer science teaching certification. Frankly, she says, currently the Illinois State Board of Education (ISBE) doesn’t have the resources to track or be a regulatory body for such a mandate.

For instance, she says, Monticello High School in CUSD #25 provides the opportunity for their students to take computer science courses at Parkland Community College, in Champaign, as a dual credit/dual enrollment course.

“It’s actually a really an important nuance to this bill’s language,” she says. “There’s no way every high school in Illinois will be able to have a trained CS teacher by 2022. That would require an amount of professional development and resources that, currently, nobody is funding. It’s still going to be a big ask to require schools to create opportunities for students through dual credit or dual enrollment pathways with colleges. But that’s an easier lift than requiring every school to run a CS course in-house.”

Extremely helpful, too, is U of I’s secondary education teaching endorsement in CS that launches online this summer. Hegeman-Davis says it’s designed for teachers of all backgrounds, not just those who teach traditional STEM classes.

“We wanted to be sure that we’re supporting teachers who might not see themselves as CS teachers, those who can take up the idea that CS is for everyone,” she says.

ISBE plans to release student learning standards for CS courses later this year—something they’ve been working on for months already in anticipation of the new legislation. ISBE officials have recruited Hegeman-Davis to join the committee writing the standards, recognizing her understanding of the subject on many levels.

“The state board fully acknowledges CS education is vital for the future workforce of Illinois,” says Hegeman-Davis. “We all want what’s best for Illinois students, we’re all on the same team. I’m really glad we’ve been able to work so closely at the table with ISBE.”

After her CS presentation to the ILBC education committee, Hegeman-Davis was invited to a follow-up call reviewing all the topics being addressed in omnibus HB 2170. She noticed a section about Freedom Schools being proposed, and knew specific expertise existed within the College to help shape the vision for this piece of policy. 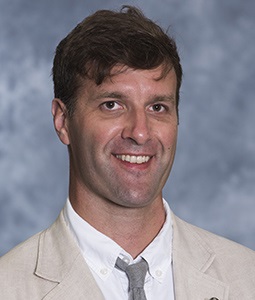 “I immediately wanted to connect them to Rep. Ammons,” she says. “It was serendipitous. Ammons quickly recognized the College’s deep knowledge of Freedom Schools, and asked Dr. Hale to weigh in on the bill’s language before it went to the Illinois Senate.”

While involved late in the legislative process, Hale was given access to all the Freedom Schools language in the bill that had already passed the House. He was able to suggest several changes and additions, all of which were adopted by the Senate. The Senate-approved version, which Governor Pritzker’s signature made a reality, reflected legislation to fund a Freedom School Network throughout Illinois.

"The Right Moment" to Reinvest in Freedom Schools

Freedom schools have existed in America since the post-Civil War Reconstruction era, in one format or another. Their purpose has been to provide academic instruction to students while imparting overriding values of community engagement, activism, and civic participation.

And now, a much-needed Freedom Schools revamp is happening in Illinois during the 2020s.

History has changed in so many ways over the last year, Hale points out. At the state and national level, he says, the Black Lives Matter movement has brought attention to—among other injustices—the polarization of public education and how it’s supported. 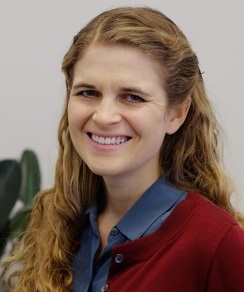 “And the thing that kept coming up in conversations with legislators is the way the pandemic has highlighted deep societal inequities,” says Stone. “Not just inequities in health care—which of course are really stark—but also how the educational divide is growing in terms of which kids were able to get the education they needed this year. This was stressed by Rep. Ammons and Sen. Lightford: that now is the right moment for a refocus of Freedom Schools.”

Hale says that much of the Freedom Schools language in HB2170 was used regarding a dual pandemic—of systemic racism and COVID-19.

“Freedom Schools are one of the few opportunities out there that fully addresses this dual pandemic, as a program that empowers disenfranchised communities and understands the need to catch students up academically while also transforming the system to better work for families,” he says.

Luckily in Illinois, he says, the leadership of the Legislative Black Caucus is attuned to this. While other states are expanding funding to privatize K-12 education efforts, Illinois’ Black Caucus members are up to date on the research, collaborating with education policy experts, and are listening to what their constituents are saying.

“And this Education and Workforce Equity Act reflects that,” says Hale. “The Black Caucus is one of the few groups of lawmakers in the country who are going in this direction. They’re looking to strengthen educational access and opportunity through the public system, and Freedom Schools can and hopefully will be an integral part of this.”

Vision for a Freedom Schools Network

Currently, Freedom Schools programs exist in two places within the state: Chicago and Springfield. Thanks to the university’s backing and the state’s new legislation, that’s about to increase.

This summer, from June 7 through July 16, Garden Hills Academy in Champaign will host a Freedom Schools pilot program run by the University of Illinois for K-5th grade students.

“We’re reinvigorating a program here in Champaign-Urbana that hasn’t been in operation for more than ten years,” Hale says. “Over the six weeks, we’ll get pieces aligned so the program is effective and target that time where students need instruction and don’t get it in the traditional system.”

Along with funding from the Office of the Chancellor and the Center for Education in Small Urban Communities (CESUC) at Illinois, Hale and Stone give kudos to Tracy Dace, founder and executive director of the local Driven to Reach Excellence and Academic Achievement for Males (DREAAM) program, which is providing funding and consulting for the Freedom Schools pilot.

Hale says the biggest difference over previous iterations of local Freedom Schools programs is the university, as a large public institution, supporting the new model and therefore recognizing its value to the community. And within the College of Education at Illinois, he adds, are faculty and staff who are already passionate advocates for pursuing equity and social justice in education.

“I think the part of the Freedom Schools language in the bill that’s so exciting is the idea of Illinois building out a statewide network with attention to small urban and rural communities outside of Chicago,” says Stone. “There needs to be planning around what this will look like, and how schools around the state will collaborate and get teachers the training needed,” she says. “But the infrastructure is there.”

Hegeman-Davis says the credit for HB2170’s passage should go to Senator Lightford and Representative Ammons for rallying support and getting the votes needed to pass the bill. She was told that because the ILBC’s 30 members sponsored and took up this legislation, it was easier for the Governor’s Office to back and sign it.

She also says the Office of Government Relations leveraging the collaboration of university experts throughout the entire course of the omnibus legislation’s development was key.

“We laid a lot of groundwork over the past few years in Springfield, with the governor’s office,” Hegeman-Davis says. “We had multiple meetings with Deputy Governor Ruiz to provide insight and research, and it was well worth it.”

After the bill’s signing, Rep. Ammons reached out to the Office of Governmental Relations to specifically thank the U of I for “stepping up when we needed them.”

“It makes me so happy that this has been such a beneficial experience on all sides,” says Hegeman-Davis. “And it underscores that my goals—at the land grant institution of the state—to expand access and opportunities for teachers and students in every school district so they can see a pathway from where they are to a place like the University of Illinois Urbana-Champaign, are worthwhile and achievable.”