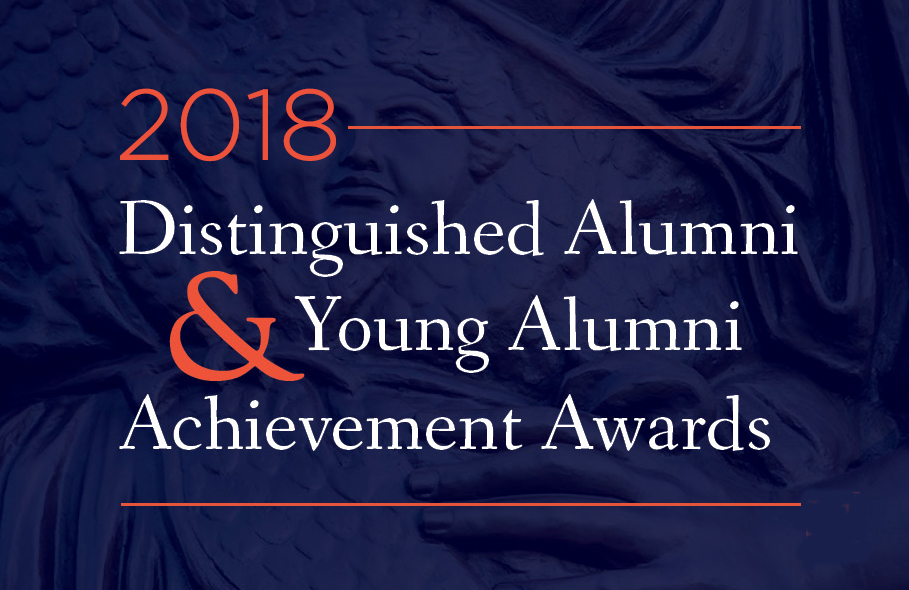 The College of Education’s annual Distinguished Alumni & Young Alumni Achievement Awards event honors both seasoned alumni and young graduates who are leading the way in the education field.

This year’s event was held on March 9 in the Alma Mater Room of the I Hotel and Conference Center in Champaign. A reception, dinner, and awards program were all part of the evening’s festivities. Dean James D. Anderson and Professor William Trent were on hand to honor the awardees.

“This event is always the highlight of our year in the College of Education,” said Lisa Denson-Rives, the assistant dean for advancement. “These alums are at the top of the educational field. Having them return to campus and share their experience with our students is an honor and pleasure every year.”

The Distinguished Alumni Award is presented to graduates who have attained outstanding success and national or international distinction in their chosen profession or life’s work, and whose accomplishments reflect admirably on, or bring honor to, the College and their Alma Mater.

The Young Alumni Achievement Award recognizes young alumni less than 40 years of age, as of May 1 during the year of the award, who have made outstanding professional contributions to his or her field since graduating from the College.

Dr. Eatman joined the Syracuse University community as an assistant professor of higher education and director of research for Imagining America: Artists and Scholars in Public Life (IA) in 2007. In 2012 he was promoted as faculty co-director of IA, a national consortium of more than 100 higher-education institutions and community-based partners working at the nexus of humanities, arts, and design. Eatman is a widely sought-after speaker, workshop facilitator, and collaborator who has earned worldwide recognition for his leadership in advancing research and practice on the multifaceted impact of publicly engaged scholarship in 21st-century-universities. He is a member of several boards, including the International Association for Research on Service Learning and Community Engagement, through which he earned the 2010 Early Career Research Award. His breadth of research and field experience has led to a number of publications, including a co-edited 2017 volume titled “The Cambridge Handbook on Service Learning and Community Engagement.”

Dr. Einarsdóttir holds an honorary doctorate from the University of Oulu in Finland. She has conducted research in preschools and primary schools, and her work has been published widely. In addition, Einarsdóttir has been involved in several international research projects as a researcher and as a consultant, publishing collaboratively with international colleagues from Europe, the U.S., and Australia. She has served as a board of trustee on the European Early Childhood Education Research Association since 2012 and is an expert in educational transitions, children’s perspectives, and action research.

Rachel Endo
Ph.D. ’09 Curriculum & Instruction
Dean and Professor in the School of Education at the University of Washington Tacoma

Dr. Endo was named the founding dean of the School of Education at the University of Washington Tacoma last year. Widely recognized for promoting equity and excellence in education, she has presented and published her research extensively in the areas of bilingual education, critical approaches to multicultural education, and the education of immigrant and refugee Americans. Her recent awards include the Arthur J. King Curriculum Innovation Award in 2018, the Carl A. Grant Excellence in Research Award in 2017, and the inaugural AERA-REAPA Don T. Nakanishi Excellence in Mentorship Award in 2017.

Dr. Hong helps develop games for apps and the Web, and he has published numerous academic articles in international journals that focus on digital game-based learning, thinking skills, and creativity. While at Illinois, Hong was involved in creativity-training research that led him to organizing contests for youths. He also helped establish the Taiwan Creativity Development Association and organized the International Exhibition for Young Inventors. More recently, Hong has developed educational game apps such as Garden Science and Whywhy POE, which is hand-held technology that has promoted science inquiry and learning. He was honored in 2013 as an Outstanding Researcher by the Ministry of Science and Technology in Taiwan.

Dr. Perkins serves as the director of Applied Women's Studies and director of Women's and Gender Studies at Claremont University. A historian of higher education for women and African-Americans, she was also the director of the university’s Africana Studies program from 2007 to 2014. Perkins has published extensively on black women in higher education and is the author of Fanny Jackson Coppin and the Institute of Colored Youth, 1837-1902 as well as the forthcoming book The Black Women Talented Tenth: The History of Black Women's Higher Education, 1850-1968. She is a former board member of the National Council for Research on Women and was the 2013 recipient of the Anna Julia Cooper Award in Education from the National Veteran Feminists of America.

Dr. Stayton coordinated the blended undergraduate and graduate early childhood education and early childhood special education degree programs while at Western Kentucky. She has published on these topics in both research- and practitioner-based publications and has directed numerous state and federal grants specific to preservice education and professional development. In addition, Stayton has presented widely at state, national, and international conferences and currently serves on three refereed journal editorial boards. She is involved in state and national initiatives within her field and is the chair of the Personnel Preparation Council of the Division for Early Childhood, and a member of the Professional Standards Development Workgroup of the Council for Exceptional Children.

Dr. Stovall’s scholarship investigates critical race theory; the relationship between housing and education; and the intersection of race, place, and school. To bring theory to action, he works with community organizations and schools to develop curriculum that addresses issues of equity and justice. His work led him to becoming a member of the Greater Lawndale/Little Village School of Social Justice High School design team, furthering his involvement with communities, students, and teachers. Stovall’s work in these realms has manifested itself further through collaborations with the Peoples Education Movement, which encompasses classroom teachers, community members, students, and university professors in Chicago, Los Angeles, and the San Francisco Bay Area. These individuals engage in interactive community projects centered on creating relevant curriculum.

Dr. Bates is an educational psychologist who researches and develops educational innovations at UChicago STEM Education at the University of Chicago. She has led the development of several digital tools for STEM teacher learning, including the widely used Everyday Mathematics Virtual Learning Community (http://vlc.uchicago.edu). She has also developed an online financial-literacy course for teachers and an adaptive digital planning tool for teachers called CurriculumKit. Additionally, Bates has published numerous articles on how teachers use and learn from online tools, and she co-edited a volume on digital curricula in school mathematics. Bates has served as a curriculum writer on mathematics, science, and financial literacy curricula and, in addition to her Illinois degrees, earned a bachelor’s degree in English secondary education from Millikin University.

Mr. Weaver is currently pursuing a doctorate in the Department of Education Policy, Organization & Leadership. He is passionate about helping students realize their dreams and is a proud former student himself of the Chicago Public Schools system. Following his time in college, Weaver taught multiple levels of English literature, served as principal at Gwendolyn Brooks College Preparatory Academy in Chicago, and assisted in various capacities with enhancing the education of college-eligible minority students and African-American students. In his current role as one of three community superintendents, he helps support 15 principals and more than 12,000 racially and economically diverse students. In addition, Weaver is part of a newly developed leadership team that is implementing an ambitious plan to create personalized learning experiences for each of the district’s 35,000 students.