The College of Education: An Enduring Legacy 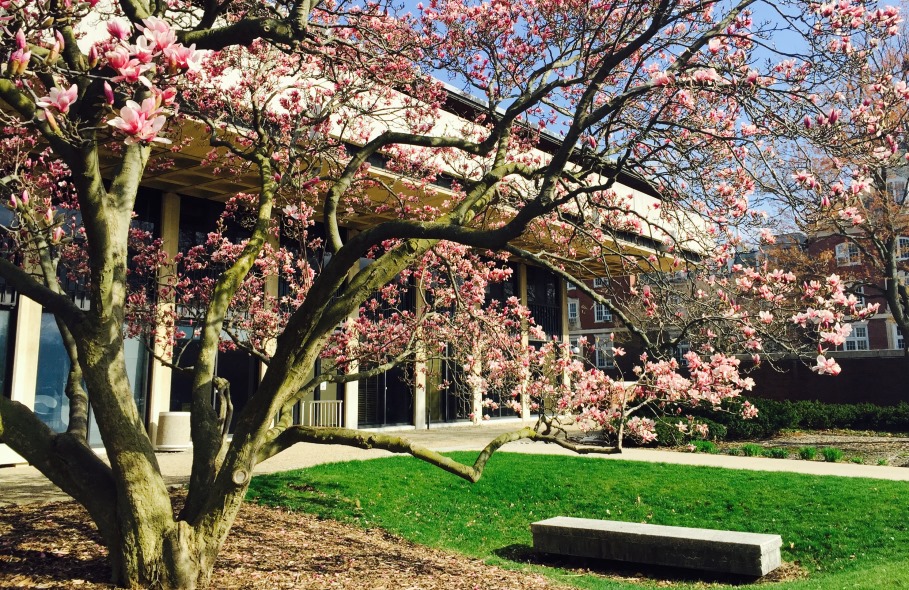 The names read like a who’s who of professors who stand at the head of the class in the field of education.

Each one a pioneer blazing a trail. Each one opening up pathways for others to follow.

And each one, of course, a professor in the College of Education, a star in the constellation that has shone brilliantly over the entirety of the College’s 112-year existence. 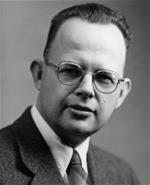 Lee J. Cronbach first made waves in 1948 with what became known as “Cronbach’s alpha,” which estimates the reliability of psychometric tests. Cronbach is considered to be one of the most influential educational psychologists of all time.

Samuel Kirk, who coined the term “learning disability,” is known as the “Father of Special Education.” By 1950, he, his wife Winifred Kirk, and Merle Karnes were writing papers that thrust them—and Illinois—into the leadership role in the field of special education. Based on Samuel Kirk’s work, federal legislation was passed that authorized the Head Start program. 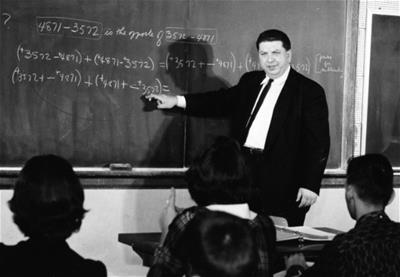 Jack Easley Jr. and his doctoral student, Rosalind Driver, opened up a new realm of research in how children think about scientific phenomenaand in the constructivist movement in science education.

In 1976, under Richard Anderson’s guidance, the College established the Center for the Study of Reading to address the critical literacy problems in schools. Anderson is one of two faculty (Dean Jim Anderson is the other) who have been elected to the National Academy of Education on the basis of their outstanding scholarship. He has published over 200 books and articles, and his global impact in education and educational psychology is immense.

The College created the Center for Instructional Research
and Curriculum Evaluation in 1964 to bring together outstanding researchers from around the world.

In 2005, the Goldstick Initiative for the Study of Communication Disorders was initiated to bridge communication gaps between special-needs children and their families.

The College established the biennial Youth Literature Festival in 2008 to promote the value of reading in the lives of youth.

More than one million students have benefited from Samuel Kirk’s research in special education. When you add in the research of the other professors already named—and the legions of accomplished professors not named—the impact of the College on students around the globe runs into the tens of millions.

Just as trailblazers open paths for others, so success tends to beget success. The allure and reputation of Illinois as a premier, if not the premier, institution for research in education has continued to draw the best scholars to the College over the decades, and inroads and breakthroughs continue to be made by today’s scholars.

“Maya Israel is doing great work around access for students with disabilities to learn about technology, specifically about computer science,” says Amy Santos, head of the Special Education department in 2016. “And Meghan Burke’s work around family advocacy is huge. She has developed a parent training curriculum that teaches families how to advocate for their children with disabilities. It’s the only one we know of that has data that shows the curriculum actually works.”

Santos also points to Micki Ostrosky, now interim head of the department, and her work in socioemotional confidence and attitude formation; Ostrosky has developed a curriculum that helps teachers facilitate inclusion by helping children develop healthy attitudes toward their peers who have disabilities.

“That’s something that’s not out there, and that’s really important,”says Santos.

“And Hedda Meadan-Kaplansky’s work around developing apps that will help family members and teachers understand functions of behaviors, of why children engage in challenging behaviors, is being tested now. Again, there’s nothing in the field on this right now.”

“You have people from different departments across campus, bringing in engineering students and learning what it means to really collaborate,” says Sarah McCarthey, interim department head of Curriculum & Instruction. “The multi-touch tables and the work students do on them have the potential to be a breakthrough in terms of thinking about collaborating.”

Barbara Hug is also focusing on science education. She and Brown have developed an online master’s of science teaching program. “That’s a collaboration with the School of Integrative Biology,” Brown says. “With biology, if you got your degree more than ten years ago, you’re out of date. So we put together a program to get teachers up to speed on the latest developments in biology.”

In the Educational Psychology department, Jennifer Greene, who studied with Lee Cronbach and was deeply influenced by him, focuses on the theory and practice of evaluation, particularly of educational programs. “Jennifer’s work underscores the educative and democratizing potential of evaluation,” says Department Chair Dan Morrow. “Her work involves paying close attention to the rich social, cultural, and political contexts within which evaluation data are embedded.  As such, Jennifer’s work reflects Cronbach’s emphasis on the critical importance of context in interpreting evaluation data.”

Similar to Greene building on Cronbach’s work, Kiel Christianson is building on the legacy of George McConkie, who revolutionized the scientific study of reading by helping to develop eye-tracking methods that measure readers’ attention. “Kiel is building on McConkie’s pioneering research,” Morrow says. “He is using eye-tracking methods to investigate issues related to reading as well as language comprehension more broadly, from the impact of context on word access during reading to the processes involved in learning to read in a second language.”

In addition, Morrow mentions Kristen Bub, who studies how family and community factors impact children’s socioemotional and cognitive development, readiness for school, and academic achievement. He also notes that many professors in Educational Psychology are conducting research in STEM learning and instruction, various aspects of socioemotional development, and cognition and communication across the lifespan.

The Education Policy, Organization & Leadership department, says Interim Department Head Yoon Pak, “is always looking at better ways we can innovate and how we can renew the ways we think about things. Our department is truly unique in how, at the core, we think about social equity and diversity. The diversity of faculty that we have is unique. But I don’t want it to remain unique. I want it to be the new norm, a reflection of 21st-century faculty.”

Bill Trent is principal investigator for an NSF-funded STEM study focused on broadening participation for under-represented minority students in STEM fields. “The implications for this are huge,” Pak says. “It’s important to research the experiences of underrepresented students in these areas that are touted as high need in the future.”

Pak points to the relevancy of Eboni Zamani-Gallaher’s research in community college issues, including the psychosocial adjustment and transition of marginalized collegians, access policies, and student development. “How do students matriculate through that process?” she says. “How well does our secondary education prepare them to be successful in community colleges, and how well do community colleges prepare students to enter four-year institutions? So it’s about that form of student achievement: Where are they getting those supports, where is it needed?”

Pak also mentions the research of Grace Oh and David Huang, who are investigating online learning systems, pedagogy, and design.

“They’re looking at what this means not just for our traditional student-age learners, but for adult learners as well,” she says. “How do we design learning and technology tools for different populations? They are bringing the learners and the teachers together to form new types of innovations.”

Sustained excellence involves setting a standard and then diligently maintaining it. Over the decades, you can discern the passing of an academic baton as younger professors have furthered the research of their predecessors: Chronbach to Greene. McConkie to Christianson. Jim Halle, professor emeritus in Special Education, to Meadan-Kaplansky, his advisee. And now Meadan-Kaplansky to current students such as Moon Chung, as well as Shari Hopkins continuing the service-learning work of Stacy Dymond.

Such excellence is sustained through attracting the highest- quality faculty and graduate students. It is the result of clear vision and systematic execution. It happens in an environment that is rich in collaborative research, with one communal goal in mind: groundbreaking research that leads to changed lives.

“Collaboration is a necessity,” agrees Yoon Pak. “We can’t exist in a vacuum; that’s not the way the world works. We’re only better if we have diversity of ideas. That’s something that’s deeply ingrained. That’s not just relegated to the sciences. That’s the way we best learn. This is the way kids in schools learn, by being exposed to different degrees of learning styles; this is the same for educators.”

Dan Morrow, who was recently named to the inaugural faculty of the Carle College of Medicine, sees educational psychology as an intrinsically interdisciplinary field. “We combine insights from the psychology of learning, developmental sciences, sociology, quantitative research methods, and other disciplines in order to analyze how learning outcomes emerge from different teaching approaches across the lifespan, and in different educational contexts,” he says. “Reflecting this interdisciplinary nature of the field, faculty in our department are methodologists, developmental psychologists, cognitive psychologists, and counseling psychologists. Not surprisingly, our faculty play a key role in orchestrating interdisciplinary research projects with collaborators across campus and beyond. This work helps to link the College of Education with the rest of campus.”

The impact of the College, of course, is felt far beyond campus as well—not just in the application of its research in various educational settings, but in the academic pursuits and leadership of graduates and professors who develop their skills and insights at Illinois and then have gone on to make their mark elsewhere.

Presidents. Provosts. Institute directors. Renowned researchers and instructors. They fill many roles. But they have this in common: They are part of the College of Education legacy.