Engaging students in the life and work of Dr. Martin Luther King Jr. 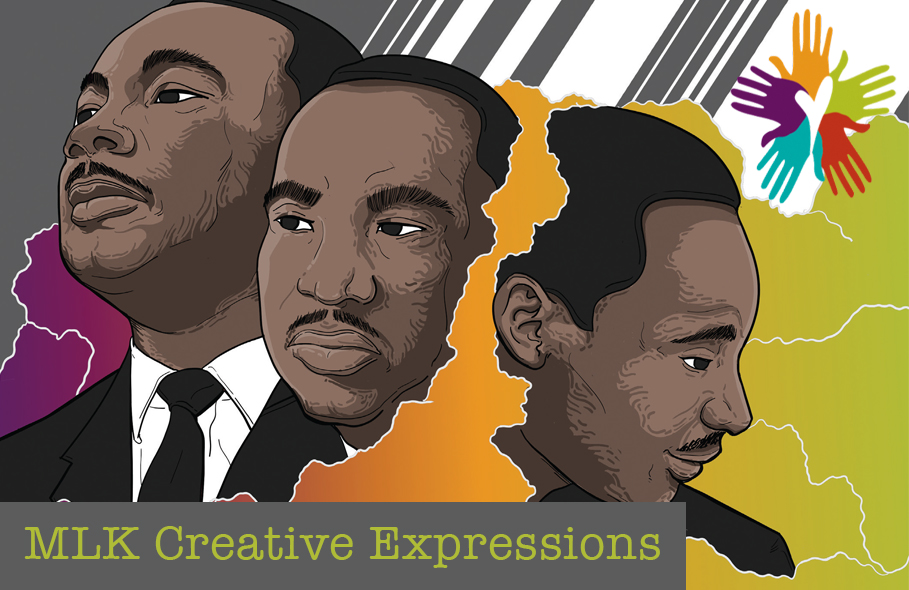 Every year students from local K-12 schools participate in the MLK Creative Expressions Competition, sponsored by the College of Education.

During this year’s contest, students are using a variety of media to express their ideas on how Martin Luther King Jr. pursued his dreams for equality in the U.S. during trying times in the 1960s. On a personal level, participants are reflecting on how they have fought injustices and embody the spirit of Dr. King in their own lives.

The College has held the competition for 15 years, with the Center for Education in Small Urban Communities organizing and collaborating with local schools since 2012. William Trent is the director of the Center and a professor in the Department of Education Policy, Organization & Leadership. He said that today, more than ever, it is crucial to reassert, teach, and elevate King’s examples.

“The competition is invaluable as a way of engaging our youth in an understanding of an American leader who dedicated his life to securing many of the realities of citizenship that some now take for granted,” Trent said. “His life’s work is an example of courage, conviction, and commitment to a set of ideals and principles that reside in the very heart of our constitution, defining what it means to be an American. He struggled to assure these benefits of citizenship to every American from every walk of life, and he did so despite brutal opposition that threatened and eventually took his life.”

Trent said the College has always been a leader in the effort to prepare educators who will provide children with the very best of their insights and understanding of what it means to be an American.

He added that American education is a foundational institution in instilling these understandings in each and every generation.

“This is why our schools and the curriculum our children experience are the site of such contestation," Trent said. "Every child must receive the very best of our insights and understanding of what it means to be an American and be provided the quality of teaching and learning that prepares them to fulfill their civic responsibilities and to realize the full potential of their individual gifts.”

As in years past, the 2017 competition is part of the campus’s Martin Luther King Jr. Commemoration, which is co-sponsored by the College and takes place January 13-21. This year’s theme is “Pursuing the Dream in Challenging Times,” and participants of the College’s MLK contest submitted personal essays, poems, songs, short stories, drawings, paintings, mixed media, multimedia, and sculptures to convey their thoughts on the subject.

Last year the Center received nearly 150 entries from students who were asked to think about what their community looked like and how they could change it to be more inclusive. Victor Perez, the coordinator of operations in the Center, said he has received more than 100 entries this year.

The winners and honorable mention recipients of the contest will be honored at the January 21 Community Celebration, which will take place at the Krannert Center for the Performing Arts from 10 a.m. to noon. The event is free and open to the public.

Other happenings during the campus’s MLK Commemoration week include a countywide celebration, a unity breakfast, a day of service, and a poverty simulation event.

Reflecting on the weeklong activities, Trent said the College’s co-sponsorship of the MLK Commemoration provides an opportunity to join with a cross section of the community in an effort to continue to elevate the principles that King dedicated his life to, as well as to collectively recommit to assuring that all citizens and those who aspire to being an American citizen are the beneficiaries of those principles.

“It’s also an occasion to remind ourselves that there is still much work to be done,” Trent said