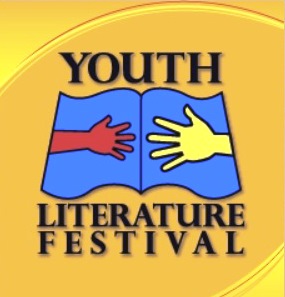 Like worthwhile sequels to a topnotch story, the College’s biennial Youth Literature Festival (YLF), which began in 2008, keeps growing and continues to inspire children from kindergarten through high school.

The numbers are impressive: During the festival’s two days in October, 22 authors visited more than 70 schools and libraries in Champaign County and in five nearby counties, sharing their work and insights at assemblies, book discussions, readings, and writing workshops.

In all, more than 14,500 schoolchildren participated in author events at their schools. To Linda Tammen, program coordinator for YLF and a former grade-school teacher, these events are the most important parts of the festival.

“Due to economic circumstances, some of these kids won’t ever have access to an author unless we bring one to them,” she said. “We had a lot of authors who did a lot more than what they were assigned. Everybody who came was just that kind of person.” 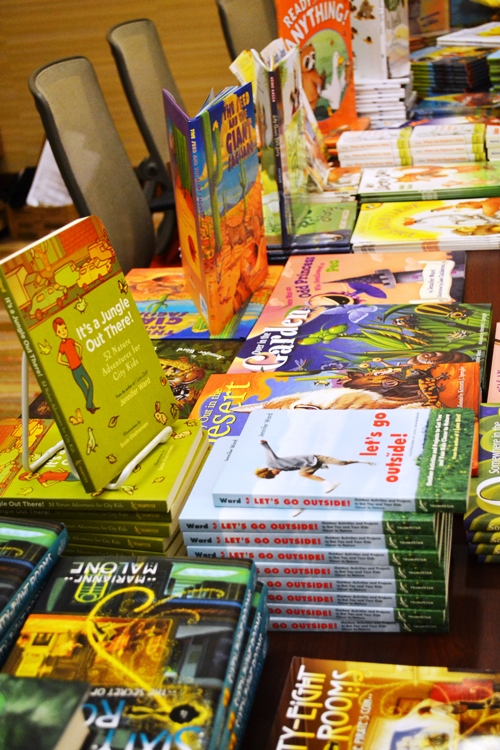 Just as important, the children who interacted with the authors were engaged and, in some cases, positively transformed for the better.

Author e.E Charlton-Trujillo, for example, bonded effectively with teenagers, even those who were easily distracted in class. She gave one student the nickname of his favorite rapper and an autographed copy of her book.

“His teacher said his interaction with the author has made him feel more engaged at school,” said Tammen. “He’s raising his hand in class, and he’s constructively participating.”

The act was likely second nature to Charlton-Trujillo, who traveled the country in 2013 to speak at workshops designed to inspire troubled youths, while promoting her third book, Fat Angie.

Tammen recalled a similar incident during the inaugural YLF in 2008, when she was a teacher at Paxton-Buckley-Loda. One of her first-graders, a supremely shy child who felt he was “different,” read all of Alice McGinty’s books about spiders.

When McGinty later visited the school for YLF, both she and the child enthusiastically conversed about spiders and the content of McGinty’s books.

“He was changed forever because of that,” Tammen said. “He thought, ‘Okay, being smart is okay. And being different is all right.’ He’s in junior high now and he still feels that way.” 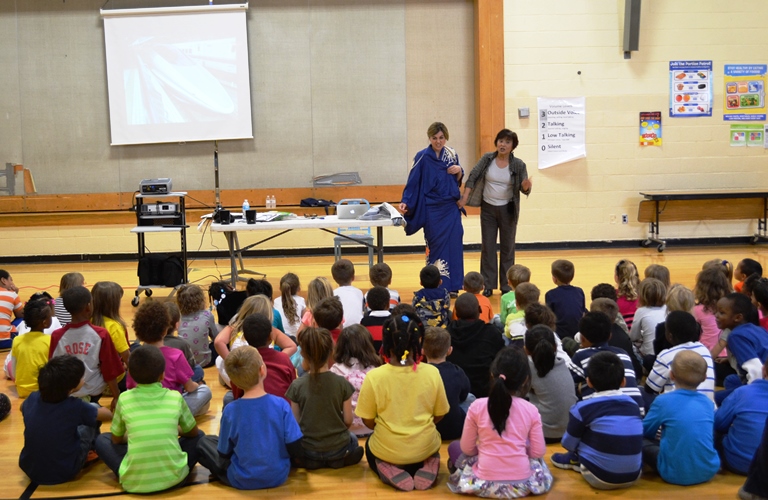 This year, author Keiko Kasza spoke to kindergartners and first-graders in the gymnasium of Thomas Paine Elementary School in Urbana. A published children’s author since 1981, she read from her book My Lucky Birthday and her yet-to-be-published book called Finders Keepers.

The most poignant moment of Kasza’s often lighthearted talk, however, took place when she related to the children the value of reading.

“Reading is the base of everything,” Kasza said after the program. “If you read a lot, you develop that device in your head to determine what is good writing, what is it all about, and then you use that device to judge your own writing work.”

Of course, the kids in attendance just wanted to hear good stories, and that’s what Kasza provided that afternoon, much to their pleasure, and to the delight of Thomas Paine’s librarian, Deb Newell, who spent many months on the YLF committee helping coordinate events.

Without the help of the College and other sponsors who support YLF, Newell said her school could never afford to bring in authors.

“We have a 67 percent poverty rate in the building and our budget is very small,” Newell said. “The kids think an author is usually dead, so to have one come and talk about the writing process really helps them see what it’s about, and then maybe they can do it, too.” 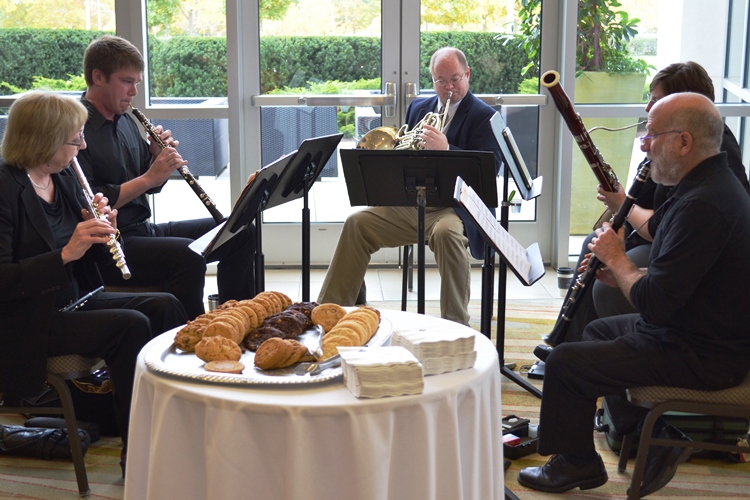 Lofty thoughts such as these are complemented by the family-oriented Community Day, a free event on the festival’s last day that features panel discussions, storytelling, puppetry, and, for the first time since the festival began, music from a professional symphony.

This year’s Community Day drew approximately 1,000 people to the iHotel and Conference Center, where numerous campus entities and local organizations had activity tables. Children and adults took in the expertise of local filmmakers (Pens to Lens), participated in a folktale activity (Spurlock Museum), learned about books in Spanish (Center for Latin American and Caribbean Studies), shared art adventures (Department of Art Education), and much more. 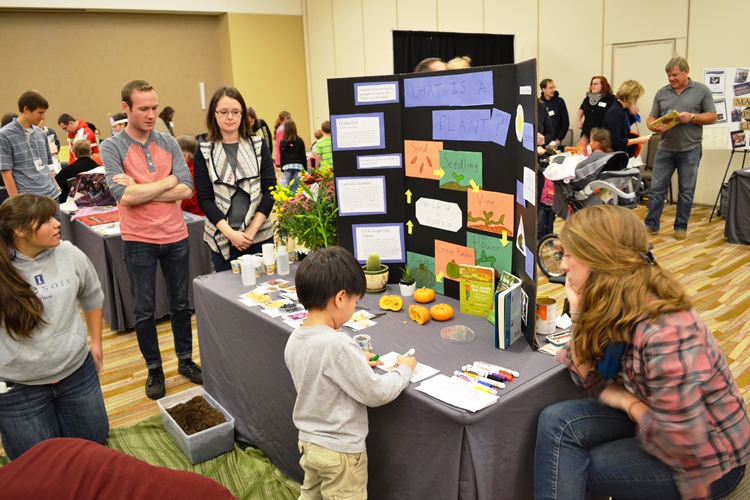 The Department of Special Education had an activity table that offered preschool children with and without special needs the chance to interact with story props, pictures, and easy-to-use communication systems.

“This was a particularly interesting panel because the authors brought one of their own books and selected a book from another author that they felt worked well with their book for use in the classroom,” said Tammen.

Other panel topics included the need for diverse books and how to get published. 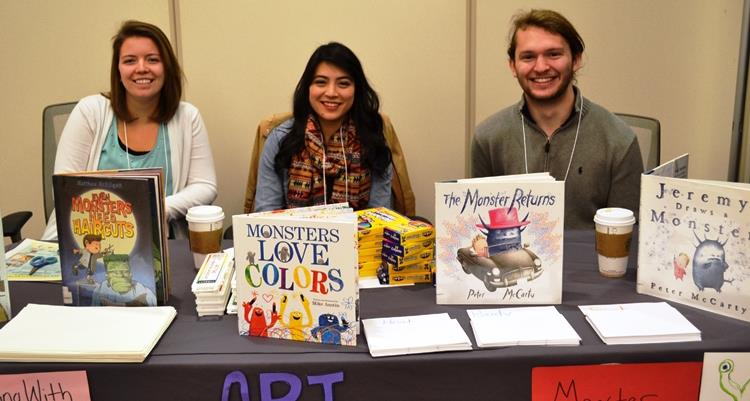 Though YLF in 2014 was as enlightening, eventful, and festive as ever, Tammen believes it could grow further in 2016, especially if, as she hopes, educators from the Danville and Decatur school districts provide venues and new ideas to enhance the festival.

She also wants to invite two “big-named” authors in 2016, which could make Community Day an even more popular event. It could happen, given how the invited authors enjoyed themselves in East Central Illinois.

“Several authors said that this was their favorite festival,” she said.

The ultimate purpose, of course, is to open up and better the lives of children by getting them to avidly read. A quote by Neil deGrasse Tyson, host of Cosmos: A Spacetime Odyssey, comes to Tammen’s mind when she thinks of what makes YLF such a valuable festival offered by the College: "Give a kid a book, and you change the world. In a way, even the universe."

“That’s what it’s about,” said Tammen, who saw firsthand as a teacher how reading can positively shape children. “Once a child reads just one treasured book, he or she is on the right path to becoming a good reader.

“They just have to find that one book.”

The Youth Literature Festival is a biennial event organized by the Center for Education in Small Urban Communities of the College of Education at Illinois, in collaboration with the Graduate School of Library and Information Science and the University Library. The festival would not be possible without all of our terrific sponsors and partners!

To inquire about sponsoring the 2016 YLF, please contact Linda Tammen at ltammen@illinois.edu.